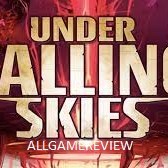 It is suitable for one player. Playing time is short, and it’s a reasonably simple game. Earth is in peril. The aliens have come for us. Their ships fill our skies, and we must defend ourselves from underground bunkers around the globe. The fightback begins. The Under Falling Skies release date is December 3, 2020. In this article, we are going to talk about the under-falling skies review.

You are the commander of one of these bunkers, trying to clear the skies and save our world. U win the game if you manage to advance the research marker to the end of the track. You lose the game if your base takes too much damage from alien ship attacks or if the mother ship advances to the end of the game line. AI: the aliens’ actions are automatic responses to your actions.

Dice: You roll dice and place them in your base to take action. There is a campaign game with a story play turn. Here we will only look at the core game and not the additional content of the campaign. Take one of the cities to defend and grab the two boards that match the letters showing it on the city.

then place the skyboards above your base, these are double-sided with the alternative side being more difficult finally place the mothership and its five red ships as shown on your turn you will roll the five dice and choose where to place them in your base each time you place a white die re-roll the remaining dice

Placing a six here moves the alien in the same row down six spaces. We can’t normally place this die in a room beyond the excavator, but we are using this die to advance the excavator several spaces up to the die’s value. We next place two dice in this double room, moving the alien ships in those columns.

When an alien ship

When an alien ship reaches an arrow, move it to the adjacent column. If you can note that because the second white die was the last placed, there is no need to re-roll. This alien lands on a mothership icon, which causes the mothership to advance.

Once all the dice are placed, resolve them in any order. This room requires two power to use, so we remove the die and drop the power by two. It advances the tech track by five steps and you can go over multiple spaces with one die. We have zero power, but this room gives us power equal to two dice minus three.

Finally, we activate the air defense by spending one power. This room has a minus one dire modifier on it, so we remove any alien ships on flak spaces with a four or less. The mothership now advances one space and gets the bonus shown on the right, in this case, a white ship.

Other mothership actions include moving the excavator or research marker back or damaging the base. Place the red fighters destroyed back onto the empty columns and the white ship on the column with the most forward ship. They will move next turn.

Under Falling Skies is a solo game designed for solo play, so this is one made for solo gaming. With that experience in mind, most of the content of the box is additional material for the campaign, most of which can be integrated into the core game.

The game itself has a lot of levers to adjust the difficulty to suit your needs, from different player cities with different abilities to robot workers to different skyboards. You can tune the game a lot, but overall, this is one for solo gamers, specifically those solo gamers who want a bit of low-luck, high-skill experience.

The best thing about this game is that the ai responds to your actions. You are always screwed over by your own mistakes, not an unlucky event card. However, to get the most out of the campaign, you really have to like the core gameplay loop.

If the core game doesn’t work for you, adding more bells and whistles to it won’t fix that either. The longboard is also a good choice for a less complex puzzle game for solo play. I hope you like my

If the core game doesn’t work for you, adding more bells and whistles to it won’t fix that either. The longboard is also a good choice for a less complex puzzle game for solo play. I hope you like my Under Falling Skies Review.

Dawn Of The Monsters Review