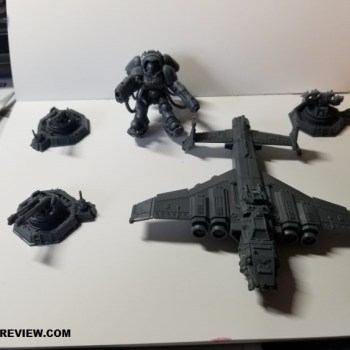 It’s a game for two or more players; the playing time is medium, and it’s a moderately complex game in the grimdark. Future pilots take to the skies to engage in relentless dogfights. Which of the two squadrons will come out on top?

The game ends after either 12 rounds, when the scenario says so, or when one force is reduced to one craft’s remaining points. Each player has a points budget to buy units from a list of secret orders: You will place orders in secret for each type of craft dice.

Conflict is resolved with dice rolls. Play a turn Select the scenario to play and set a point budget. Set up the game according to the scenario rules. Each craft has a series of stats that determine how fast it goes, how well it can maneuver, and its weapons loadout.

Your army list will also have optional weapons and upgrades. Each craft tracks its current speed on the left and its altitude on the right. Facing is also very important in the game, so mount the models facing forward to start the turn and place a hidden order for each craft beside it.

Each order number matches one of these movement diagrams, but only the most agile craft can use all eight. Then, roll for initiative. The winner chooses which side moves first before resolving movement.

Here are two possible places the craft could move and then again to here finally the movie shows how you can change the craft’s facing you can also climb reducing your speed or descend to increase it,

you can also use your throttle score to change speed going over your speed or altitude maximums can send you into a stall and possibly a spin forcing you to gain control of the craft before you crash Players alternate moving craft one at a time until all craft has executed their moves.

A fighter much higher or lower is impossible to hit. Let’s level them out. At short range, the shuriken cannons have eight dice. We roll five hits, but now have to roll for damage. The damage of the weapon is five plus, so we roll the hits again, scoring 2 damage.

The yellow fighter has three structures, so it keeps on flying for now. Why would you like this game? In-air combat games are a pretty specific niche, and this is one of the better ones.

The core box comes with the rules and all these figures and can be expanded with additional model boxes as well as other factions sold separately. The list building allows you to customize your squadrons and it’s always fun to tinker with loadouts.

While I think this is one for Warhammer fans first and foremost, anyone interested in air-to-air combat games would also find it engaging and fun. The best thing about this game is the miniatures.

They inspired me to get out my brushes and paint a full game for the first time in years. However, the rules felt quite old-school and the game’s workshop standard of the roll to hit and then roll to damage is always a bit clunky. The original ruleset dates back to 2007.